Copyright © 2012 by Korean Society of Otorhinolaryngology-Head and Neck Surgery.

This is an open-access article distributed under the terms of the Creative Commons Attribution Non-Commercial License (http://creativecommons.org/licenses/by-nc/3.0) which permits unrestricted non-commercial use, distribution, and reproduction in any medium, provided the original work is properly cited.

Pott's puffy tumor is an infrequent entity characterized by a subperiosteal abscess associated with frontal bone osteomyelitis. It has become rare due to the development of antibiotics and is usually seen as a complication of frontal sinusitis. Although Pott's puffy tumor is more commonly described in children, it should also be included in the differential diagnosis of swelling on the forehead in adults. Once the diagnosis is suspected, appropriate imaging should be performed to evaluate the possible complications. The treatment of Pott's puffy tumor combines medical and surgical approaches in order to prevent further complications. The goal of surgery is to drain the sinus and to excise the infected bone if necessary. The endoscopic endonasal approach is a safe and effective alternative to the external approach. This report describes the case of a 25-year-old man with Pott's puffy tumor resulting from frontal sinusitis.

Osteomyelitis of the skull usually results from trauma or frontal sinusitis and may be associated with a purulent collection under the periosteum, causing swelling and edema over the forehead, a condition known as Pott's puffy tumor (1). This lesion, originally described by Sir Percivall Pott in 1775, usually occurs in children. It is rare nowadays due to the advent of antibiotics, especially in adult. Only 18 cases of Pott's puffy tumor have been previously reported in adults >15 years of age. The tumor evolves from frontal and ethmoid sinusitis (2), and is usually caused by Streptococcus spp., Staphylococcus spp., and anaerobes (3). Purulent complications including epidural, subdural, and intracerebral abscesses, are common.
The treatment of Pott's puffy tumor combines medical and surgical approaches in order to prevent further purulent complications (4). Surgical options are determined by the location and extent of infection, and include trephination, frontal sinus obliteration, and craniotomy. Recent advances in endoscopic sinus surgery have provided surgeons another method of access to the frontal recess. We report a case of Pott's puffy tumor treated with an endoscopic approach in an adult.

A 25-year-old man presented with a 3-week history of a gradually enlarging painful swelling of the right forehead, headache, fever, and rhinorrhea. He had a history of allergic rhinitis and asthma, but no head trauma. The physical examination revealed a fever and a 4×2 cm fluctuant mass above the right eyebrow and frontal sinus with surrounding cellulitis (Fig. 1A). On nasal endoscopic examination, bilateral nasal polyps and a purulent discharge were noted (Fig. 2). Clinical examination of the cranial nerves, visual fields, and vision were normal. Complete blood counts showed neutrophil predominant leukocytosis (a leukocyte count of 16×103 per ml with 79.3% neutrophils). Erythrocyte sedimentation rate was elevated, measuring 105 mm/hour. An ECG and a chest X-ray were unremarkable.
A paranasal sinus X-ray revealed opacifications of the right frontal sinus, the ethmoid sinuses, and the left maxillary sinus. A contrast-enhanced computed tomographic scan of the paranasal sinuses showed right frontal sinusitis with an anterior bone defect, bilateral ethmoid sinusitis, and left maxillary sinusitis. However, no abnormalities in the brain parenchyma were noted (Fig. 3A, B). There was evidence of bony destruction in the anterior wall of the frontal sinus and a subperiosteal abscess. The patient was treated with parenteral antibiotics (ceftriaxone 2G IV daily), intranasal decongestant and oral steroid. However, the frontal headache and frontal bulging mass did not improve with medical treatment and the patient became febrile again after 2 days of antibiotic therapy. A T2-weighted magnetic resonance imaging scan of the paranasal sinuses showed a high signal lesion of the right frontal bone marrow under the right subperiosteal abscess without intracranial involvement (Fig. 3C, D).
Surgical treatment was indicated because of the gradually enlarging mass of the right frontal area. Under general anesthesia, the right nasal polyps were resected with ethmoid forceps. After the right ethmoidectomy, the right frontal sinus natural ostium was opened, purulent material oozed out, and the abscess was drained. Samples were taken for culture and gram staining and were found to be positive for Staphylococcus aureus. The main surgical finding was a polypoid mass which had occluded the frontal recess. The frontal sinus natural ostium was opened and drained. The interval between surgery and disappearance of main clinical symptoms was 2 days and the deformity resolved during this time. One week later, a technetium-99m methylene disphosphonate (99mTc-MDP) bone scan and gallium scan were obtained. These scans were consistent with resolved acute osteomyelitis (Fig. 4) and the patient was discharged 7 days after surgical management. The antibiotics were continued orally for 8 weeks. Antihistamine was needed to control the allergic rhinitis. Six months postoperatively the deformity had not returned (Fig. 5) and the patient was free of symptoms at the one-year follow-up examination.

The patient presented with a headache, fever, and forehead mass following frontal sinusitis, which is a classical presentation of Pott's puffy tumor (1). Pott's puffy tumor is a complication of frontal sinus disease or direct injury to the frontal bone (5). It is rare now due to the advent of antibiotic therapy. However, the proximity of the frontal sinus to the anterior cranial fossa necessitates early diagnosis and appropriate treatment to improve clinical outcome and reduce the possibility of intracerebral complications. Once the diagnosis of Pott's puffy tumor is suspected, appropriate imaging (CT or MRI) should be performed to evaluate the possible complications, such as epidural, subdural, and brain abscesses. These complications have been observed in 60% of patients and result from the direct extension of the infection, or more commonly from secondary septic thrombophlebitis (3). The organisms most commonly observed in Pott's puffy tumor specimens include Staphylococcus aureus, Streptococcus spp., and anaerobes from the oral cavity (3). Verbon et al. (6) reported two cases due to Hemophilus influenzae. In our patient, the culture grew Staphylococcus aureus. Failure of medical treatment may be due to nasal polyps, which can cause insufficient natural drainage of the frontal sinus.
Traditionally, surgical treatment of Pott's puffy tumor required an external approach. This approach provides good direct visualization of lesions on the frontal sinus. However, the external procedure cannot escape the risk of cosmetically unfavorable facial scars and recent advances in technology and techniques have revolutionized the otolaryngologist's approach to sinonasal disease. Refinements in these techniques have enabled the surgeon to extend endoscopic approaches to the pathology of the skull base and orbit. However the literature contains only a few case reports by surgeons who have used endoscopes in the treatment of Pott's puffy tumor. Because of the complex anatomy of the frontal recess, endoscopic intranasal approaches to this region continue to be an area of controversy. The general rule of frontal sinus surgery is to choose the least invasive procedure with which the surgeon is comfortable and which will accomplish the task. With increased experience and improved technique, the success rates of the endoscopic intranasal frontal sinusotomy have surpassed those of the external approach. The major advantage of the endoscopic approach is that it offers a safe and effective alternative to the various external techniques, and the results are at least as good as those obtainable by the external approach. In addition, the endoscopic approach has less morbidity than non-endoscopic sinus procedures, has a shorter convalescent period, and leaves no external scarring on facial skin. Thus, unless there is another complication of the original infection, such as an intracranial complication, we submit that the endoscopic approach is the approach of choice. In support of this, the absence of intracranial complication was a common feature in cases treated by endoscopic frontal sinusotomy (7). And, of course, in the case of an immediate failure it is always possible to perform external drainage. After surgery, prolonged antibiotic therapy is necessary in osteomyelitis and abscesses (8).
In conclusion, once the diagnosis of Pott's puffy tumor is suspected, appropriate imaging (CT or MRI) should be performed to evaluate the possible complications. The treatment of Pott's puffy tumor combines medical and surgical approaches in order to prevent further purulent complications. The goal of surgery is to drain the sinus and to excise the infected bone if necessary, and the choice of surgical procedure depends on the extent of infection. Endoscopic approach is a safe and effective alternative to the external approach.

This study was supported by a grant of the Korea Healthcare Technology R&D Projects, Ministry for Health, Welfare & Family Affairs, Republic of Korea (A090084).

No potential conflict of interest relevant to this article was reported. 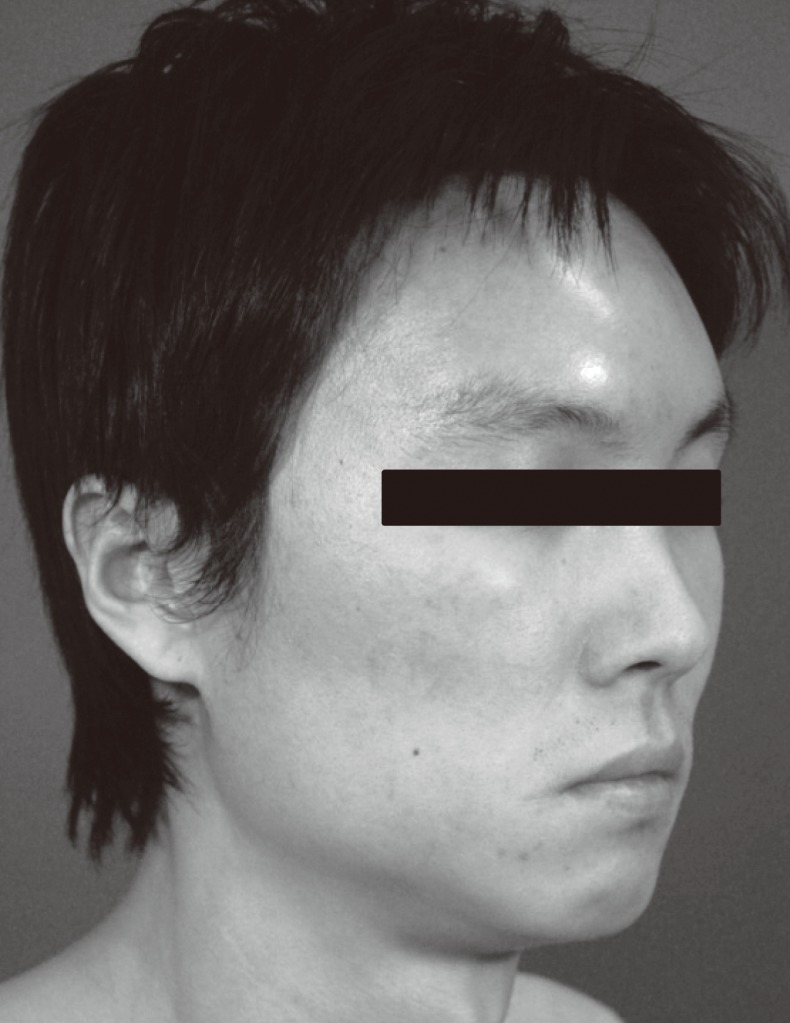 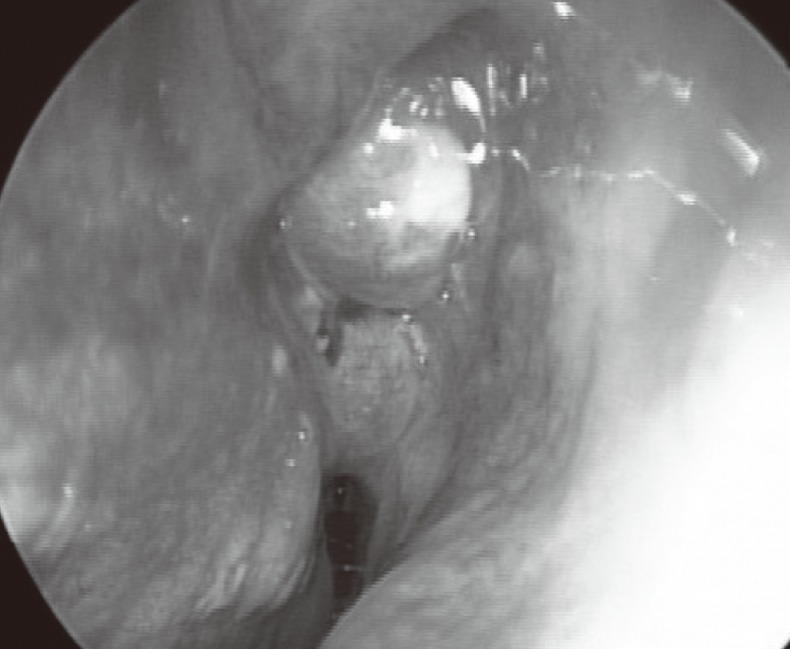 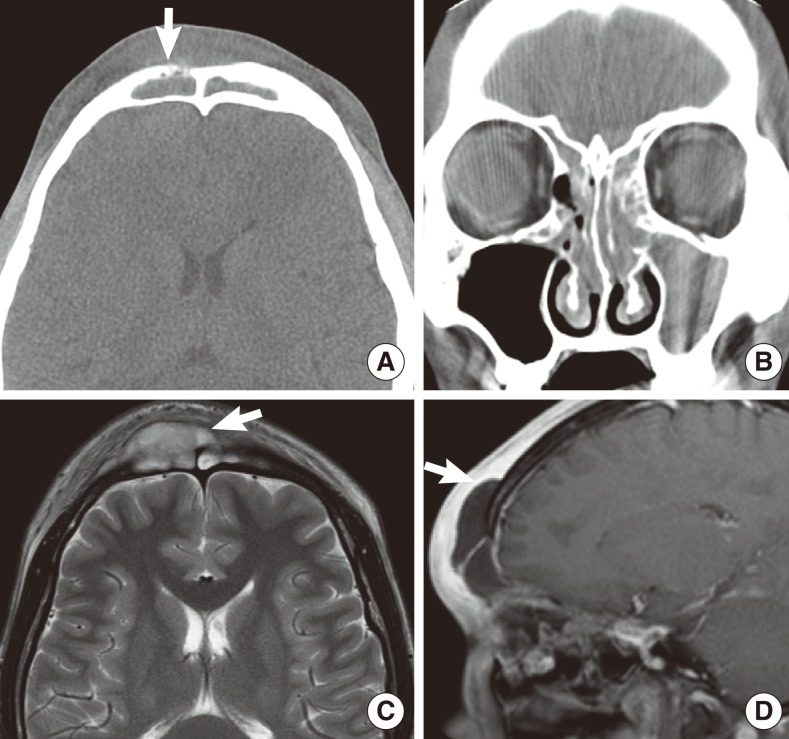 Same patient profile showing improvement of primary lesion without any defect six months after the operation. 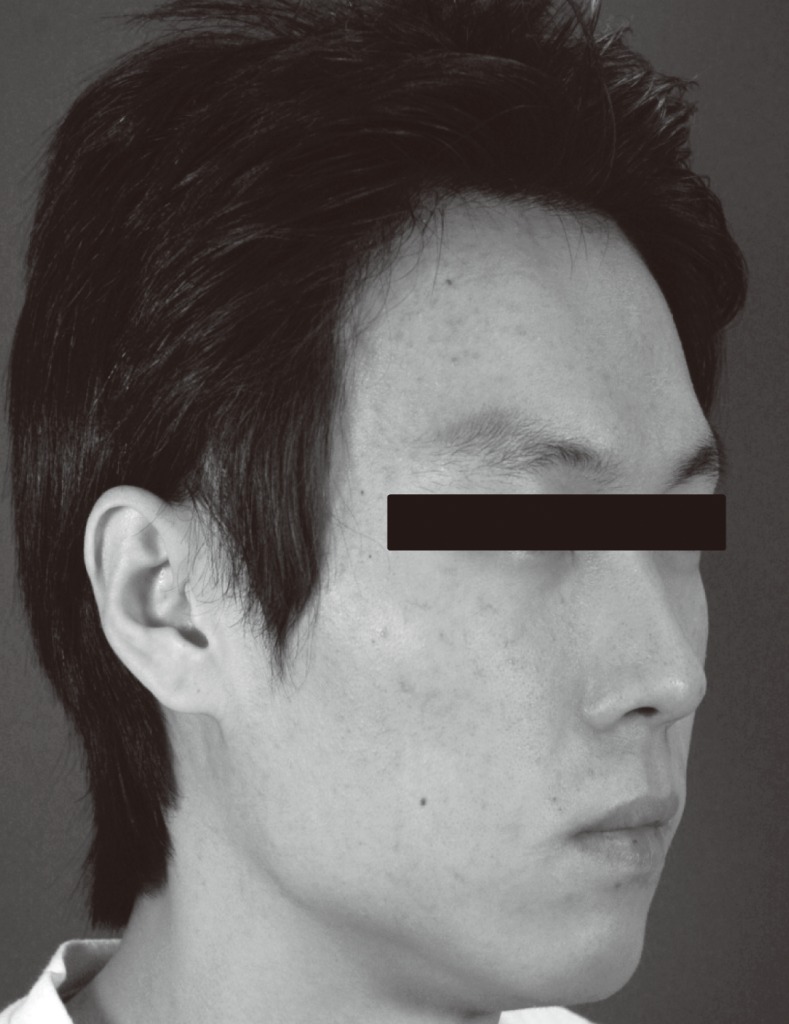